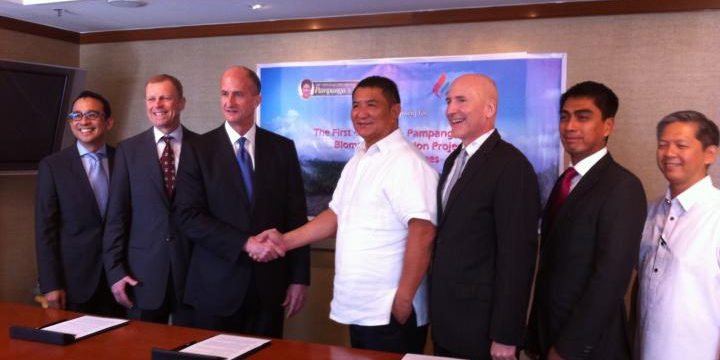 In most parts of the country, grass is cultivated as a means to feed livestock. In Pampanga, farmers are planting Napier grass to fuel a revolutionary move towards renewable energy.

The grass planted by Bacolor, Pampanga Mayor Jomar Hizon in his property was also primarily for forage, he reveals. “The Super Napier grass or Pakchong from Thailand has higher food protein than other varieties, which is why we were interested in it. It was by coincidence that we met with West Stewart, Managing Director of Advanced Energy Technologies and he told us about how this type of grass can also be used in a power plant.”

He explains the far-reaching benefits of the project: “Everything needed is on-hand. Our processed meat factory, Pampanga’s Best, needs electricity. We have enough land to plant in my town, and this project will be able to augment people’s livelihood. Based on the data that we gathered, they can easily make no less than P140,000 a year, which is more than they can make with planting rice or sugarcane alone. It is like a three-point-shot!,” the Mayor  was quoted as saying when he recently signed a memorandum of agreement with Stewart and  Jocot de Dios, CEO of GE Philippines,  to formalize the building of a power plant that uses Super Napier Grass for its fuel in his municipality.

West talks about the process that turns grass into green energy. “The way we are going to do it, is to gasify it with this GE technology, which is an upgrade of traditional technology. We take the crop, cook, and process it in a modular plant. What comes out is a good, pure gas that very efficiently combusts into fuel. Every part of the grass is utilized – it is used as fuel for power, and the ash by-product that comes out if it can go back to the farmers to be used on the land. It is going to be a clean-burning fuel, the first of its kind in the country.”

With GE‘s integrated biomass gasification solution, 60 hectares of Super Napier Grass would yield 1 megawatt of power 24 hours a day. This, he says, can be the answer to areas in the Philippines that are experiencing power shortages. “The Philippines is a very appropriate place for a project such as this, where we have farmers in one community, and a power plant a few kilometers away that can provide up to perhaps 10 megawatts. This will help solve problems in the electric grid in areas like Mindanao.” West reveals that there will be similar projects in Bukidnon and Negros, and they are expecting the Pampanga project to be operational in less than a year’s time.

Alternatives for public and private entities

GE is at the forefront of finding solutions for renewable energy. Today, it is a leading provider of wind turbines, solar power inverters and gas engines for waste to energy projects globally. “With the technology transfer we are formalizing with Mayor Hizon, we have here an ideal situation where the end user is able to grow the feedstock/fuel needed to generate power for their own use in their food processing facilities. This can be replicated in other areas in the country. We believe that in an island grid such as ours, and in a land where feedstock for biomass gasification can grow well, the opportunities will be significant,” says John Alcordo, GE’s Regional General Manager for Distributed Power in ASEAN.

He adds that projects like this will also help fuel the country towards the coming ASEAN Integration in 2015. “Many times, it is all about the feedstock and sourcing this reliably and at the most cost-effective points.  Having more of these type of projects spread across the region will drive business to develop feedstock with higher yield and lower cost in various sites, giving these power generation projects more options to choose fuel from.  This in turn will have a positive ripple effect, creating more employment, more investment opportunities while reducing the cost of power in many areas all at the same time.”

Alcordo talks about the role of GE in promoting clean energy in countries such as the Philippines, and why more LGUs and private entities should look into alternative such as these. “As technology providers, we are able to guide our customers on a number of areas related to these projects – from equipment configuration, operations and maintenance and equipment financing. Tapping into renewable energy has been proven time and again in many circumstances to not only be good for the environment, but beneficial to the business itself from a cost standpoint.  It is too significant an opportunity to be ignored.”

AET is now an authorized dealer of Thermax products and services
August 15, 2017

Do you know that we give project financing plan?