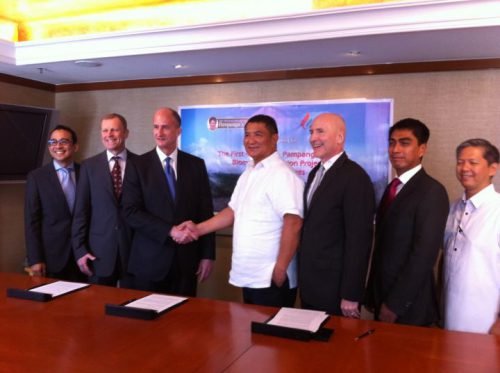 AET designs  power, energy and water systems so that Clients can benefit immediately from technical advancements  to improve water, productivity, power and environmental standards.  AET’s management has been in the renewable energy space since 1995, having achieved great success with the largest number of United Nations Carbon Offset programs (UNFCCC CDM) from its projects throughout Southeast Asia. More than 3 million tons of CO2 abatement occurred because of the efforts of the AET Partners from 1999 to 2012.

With the opening of AET in 2013, AET management’s goal was to become a national leader in providing affordable & efficient products and services, using clean and green international practices.  AET has achieved these goals. Now we seek to lower the overall energy footprint for its clients.  Energy Efficiency is the Philippines’ ‘first fuel’.

Technological obsolescence will be addressed by AET,  as our clients will find immediate production increases and per unit savings within months of the decisions to change over.

The Energy Efficiency & Conservation Act of 2019 (R.A, 11285) offers All clients the financial opportunity to benefit immediately from the change over from current production technologies to more energy efficient equipment, technologies and methodologies.  AET is one of the few companies in the Philippines that can provide our clients with custom-designed energy savings systems, and we have over $ 10 million in newly released funds for later in 2020 to invest directly in advanced energy technologies.

Through our dedication to technical service, AET Clients can rest assured that increasing the efficiencies and automation of their plants and buildings will increase the effectiveness of their processing plants and services.

AET’s core focus is distributed power generation, the most appropriate power technology in an island nation that has significant power costs and power losses.

AET carefully selected the best in breed technologies for its Clients. AET is one of the local market experts on combustion technologies. AET’s Boiler Clients can obtain the best selection of advanced technologies, at affordable prices, with lower capital paybacks.

AET offers its facility management services to operate all power and water infrastructure within commercial and industrial spaces. We are careful with our money, as each Client is with theirs. We want to work to ensure that each investment by a Client, for large and small projects, can lead to amazing production results.

Post CoVid-19 lockdowns,  AET will introduce appropriate new technologies so that our clients, who may have been effectively greatly by the lockdowns, will immediately get their businesses up and running at peak capacities even as government limits the number of employees.  This crisis offers the opportunity for all our clients ramp up and improve using the highly advanced electronics and software production tools of this post-industrial age.

CoVid-19 is unprecedented in its economic impact on all parts of this World.  To mitigate the disastrous tendancies of this disease and our Government’s severe socio-economic measure ,  AET offers, for immediate installation,  next generation purified water and air for such clients as  hospitals and hotels and resorts.  These systems will improve beyond the workspaces, and the service areas, beyond any known in the market today.

These service industries are a major part of the backbone of  the Philippine economy. It’s vital to get hospitals, and hospitality sectors open, and improving in their capabilities. It is also important that they do so in a safe and healthy way. AET can be trusted to achieve better overall environmental standards throughout the Client’s factory, processing plant, hospital, or commercial space.

With our private equity partners, AET offers financing packages for technical improvements in the factory, and better overall support of buildings of all types with technologies that reduce power & increase profitability.

AET envisions a sustainable Philippines economy to be one of the leading emerging growth nations through adaptation and implementation of extensive clean power, clean energy and clean water policies.

Advanced Energy Technologies/ Renewables Plus Co Inc. or “AET” began its corporate life in Thailand in 2012 and later in the Philippines in 2013. Our original purpose was to promote the Indian gasifier technologies related to India Institute of Science and Technology (IISc) in Banglaore, India. We achieved initial success through a 2-year strategic partnership with GE India (the gasifier technology entity) and the Thor Energy Group of Australia to co-develop various gasifier projects.  When GE retired its gasifier business, AET pivoted towards a relationship in thermal energy with Thermax Ltd. Of India. AET has operated and maintained Thermax’s more than 20 installed vapor absorption chillers (for firms such as Nestle, Rebisco and Coca Cola) for more than 7 years. It added its boiler and environmental products business in 2016.

Throughout the last several years, the firm has been involved in biomass energy, and has managed to be in biomass fuel development with major firms throughout the world including EcoPlanet Bamboo, as a local partner in search of bamboo plantation areas, and with Thai companies in Napier Grass. On the downstream side, AET works still with a number of Japanese firms in search of ag waste and wood waste for projects from Siam Cement in Sri Thammasat Thailand to JIRA  1 GW coal project in Kansai area of Japan.  Our goal is to provide leadership and insight into how to develop with partners, suitable alternative fuels for biomass projects.  AET management, with its history in carbon mitigation projects, continues to develop projects for review by the ADB and the Japanese ‘JCM’ for possible carbon abatement investment.

Where we are now

Today, AET is a full-fledged project developer in RE/EE and many types of water projects for industry and commercial purposes. Stewart leads a dedicated team of engineers in designing, engineering and promoting various types of projects for thermal and power requirements.  AET also emphasizes technologies that utilize waste heat from the process or the steam production for co generation or to power up non-electric, vapor absorption chillers.  AET is now a distributor for Broad Air Cond of Hunan, China, the world’s largest chiller makers.

In Solar projects, our firm is working on a portfolio of rooftop projects including hybrids, of over 7 MWp. Currently, we are concluding installation and erection of 900 kWp for Corbox Inc., cardboard maker with operations in Cebu and Cagayan de Oro.

For process steam, the firm is nearing completion of a major boiler project with JEVERPS noodle makers in Paranaque, Metro Manila. We are pleased to be working with Rakhoh Boilers of Pune, India in the development and execution of this turnkey project.

Since 1992, AET founders have been involved in clean water technologies, especially early on in the development of sustainable land-based aquaculture through the creation of ‘Clean Energy Purity Co.’ in 1992 with Norweigian, American and Thai partners.  Water and wastewater treatment works included big wastewater treatment projects for Union Fisheries in Thailand and industrial water and wastewater systems installed for Thai Gypsum Co. (board makers).

In 1996, the co-founders of AET, David Donnelly and Samuel West Stewart, began to develop waste management projects throughout Southeast Asia, principally in Thailand with the Bangkok Metropolitan Authority (BMA) as well as through a five-year relationship with Charoen Pokphand Co., the largest ag concern in Asia for piggery wastewater to energy projects.

The digester business in Thailand was so successful, Stewart founded PhilBIO and CleanTHAI in 1998 with investment from New York Based Rockefeller Brothers Fund.  Donnelly joined Stewart in 1999, to manage Thailand, and the two firms prospered for several years as leaders in the newly developing world of waste to energy technologies.

Stewart became the manager for offices in Ho Chi Minh City, Jakarta and Kuala Lumpur as well as Manila. AsiaBiogas core business was the development of carbon offset projects under the UNFCC Clean Development Mechanism (CDM). Our primary vehicle was our development of  a low cost anaerobic digester system trademarked as the Anaerobic Baffled Reactor or ABR for industrial wastewater. The project that is famous for using the ABR is called  the Korat Waste to Energy Project or KWTE (2003) developed by CleanThai, and supported with investment from Prince Hashim of Morocco.  Prior to the amazing success of KWTE, Stewart developed the market in the Philippines for the more common, Covered In ground Anaerobic Reactor or CIGAR for most other types of wastewater including pig and dairy wastewater (1999).  16 projects were developed from 1999 to 2005 in cooperation with EcoSecurities Co., a leader in the carbon space; Cargill Corporation, the world’s largest trading company, and UNEP in Copenhagen, Denmark.

From the advent of the CDM in 2005 until 2012, Stewart and Donnelly developed 95 carbon abatement projects throughout Southeast Asia, with leading share of projects certified by the UNFCC in the Philippines; KWTE was one of the top five largest non-industrial gas projects in carbon abatement history with over 315,000 tons per annum of CO2 abatement. Nearly all of the PhilBIO and CleanTHAI projects continue to operate well into their second and third decades of operation, a crowning achievement for these companies and their founders as major contributions to the global digester industry and to climate change mitigation. Arguably few in the climate change mitigation business have better track records than Stewart and Donnelly. These technologies were developed in association with the late Dr. Alberto ‘Tico’ Cohen, one of the pioneers in the development of the UASB digester technology for the brewery industry in Amsterdam, Holland in 1977.

The various firms created by Stewart and Donnelly to advance its technologies, were merged in 2006 with London Stock Exchange listed company, Trading Emissions plc,  to become AsiaBiogas Co. Inc. with offices in Bangkok, and later in Singapore.

Get in touch with us

Do you know that we give project financing plan?